Water to fish is like air to humans. When it is put that way, you begin to appreciate why water quality is so important to fish.

To illustrate: imagine you had a very slight gas leak in your house. You can’t see the gas and you don’t recognize the smell, but after a few weeks your health declines.

The gas itself is not bad enough to kill you, but your resistance is lowered, because your body has to constantly work to repair the damage the gas is causing. In time, you find that you get sick easily. On the other hand, if the gas leak suddenly got bad enough, it alone could kill you.

It is very similar with fish and pond water.

Poor water quality can kill your fish faster than anything else. Low oxygen in a pond can kill every fish in the pond overnight. High ammonia levels can kill fish within several days. But, even marginal levels of oxygen, ammonia and nitrates can set your fish up to fall victim to other life threatening problems.

So, the goal should always be to have the best water quality possible.

There are basically five water quality items you need to be concerned with:

pH is a measurement of whether the water is acidic of alkaline. pH is measured on a scale ranging from 1 to 14 with 7.0 being neutral. Any measurement below 7.0 is considered acidic and any measurement above 7.0 is alkaline. The ideal pH for koi fish is 7.4 but koi will do quite well in water ranging from 7.0 to 9.0 as long as it does not fluctuate too much.

Imagine you have a concrete pond that normally has a pH of 8.5 and you are constantly adding acid to the pond to lower the pH to 7.4. If each week the pH bounces back up toward 8.5 again, you are doing much more harm to your koi than any possible good that might be gained by getting the pH to stay at 7.4.

Koi fish do not do well with constant change so leave it alone. What you do need to watch for is a “pH crash”. A “pH crash” is when in a relatively short period of time the pH begins to drop and it won’t stop until it reaches 5.5. This can happen literally “overnight” in a small pond.

At a pH of 5.5, koi will begin to die within a few days. If this happens you can easily raise the pH by simply adding baking soda to the water. Try adding one cup for every 1000 gallons and check it every two hours until the pH is back to at least 7.0. Anytime all the fish in the pond suddenly begin to act differently at the same time you should suspect a pH crash. You can lower the pH in a pond by adding acid. Muriatic acid (pool acid) may be very sparingly used. A little goes a long way when used to lower the pH.

Ammonia is produced naturally by the koi in the form of waste. 70% is from their gills and the other 30% is produced through their kidneys. You can’t see ammonia in a pond, but if this ammonia is not removed from the pond the koi will literally die in their own waste.

The most effective way to remove ammonia from the pond is with a “biological filter.” In a good biological filter, the bacteria that is formed will remove the ammonia by turning it into nitrites. When installing a new filter it will take approximately 2 weeks, after fish are added to the pond, for enough of this beneficial bacteria to develop to keep the ammonia levels down.

If when you test the water, you find the ammonia level to be high, the easiest way to lower it is by performing a 30% water change every other day until it reaches a safe level.

Whenever you do a water change, make sure to add some dechlorinator before refilling the pond to remove any chlorine in the new water. Also, stop or at least severely reduce feeding the koi until the ammonia level is under control because the more food you give them the more ammonia they will produce. Also, raising the salt level in the pond to .1% when the ammonia levels are high, will help reduce the toxicity of the ammonia to the koi.

This bacteria is more fragile than the ammonia bacteria and takes longer to get established. When installing a new filter, it will usually take up to 6 weeks after the fish are added to the pond for the beneficial bacteria, which controls nitrites, to develop to the point where it will keep the nitrite levels under control. Again, the easiest way to lower the nitrite levels during this start up period is to perform a series of 30% water change when needed.

Nitrates are the last chemical produced during the nitrification cycle that takes place in the biological filter. Nitrates are not nearly as toxic as ammonia and nitrites are. Nitrates serve as food for plants and algae in the pond. Usually if a healthy layer of algae is allowed to form on the inside walls of the pond, it will be sufficient to keep the nitrate levels under control.

Oxygen levels in a pond are very important to the overall health of the koi. Plants and algae produce oxygen during day light hours, however, at night the plants and algae actually consume oxygen.

This is important because sometimes people will turn off their pumps at night to conserve energy and wake up to a pond full of dead fish in the morning and have no idea what happened. We saw one case where a man had turned off his pump at night for two years and never had a problem and then during one hot summer night he lost them all without any warning.

The problem was that the koi had continued to grow until they reached the critical point to where the oxygen in the pond, during the night, could no longer sustain them. The most common way to add oxygen to the pond is by use of a water fall. Anything that disrupts the pond surface will help add oxygen. The only place where oxygen can effectively be transferred into the pond water is at the pond surface where the atmospheric pressure on the water and the oxygen is equal.

The only way to accurately test the oxygen level in water is to use a digital oxygen meter. Oxygen testers start at around $175.00, so for most people it is not practical to purchase one. Therefore, most people will have to guess as to how much oxygen their pond contains. As a rule, if the pond has an average sized waterfall and you can hear the water flowing you most likely have enough oxygen. On the other hand, if the koi spend most of the day near the water fall or are constantly near the surface of the pond you may need to increase the oxygen level. A pond with a consistently low level of oxygen can contribute greatly to koi fish that don’t grow or that are often times sick.

Remember that koi are basically born with every disease they can ever acquire. It’s poor water quality that stresses them and in turn weakens their immune system, causing them to get sick. By carefully tracking your pond’s water quality you can ensure happy and healthy fish for years to come!

Have more questions about your fish or water quality? Email us! 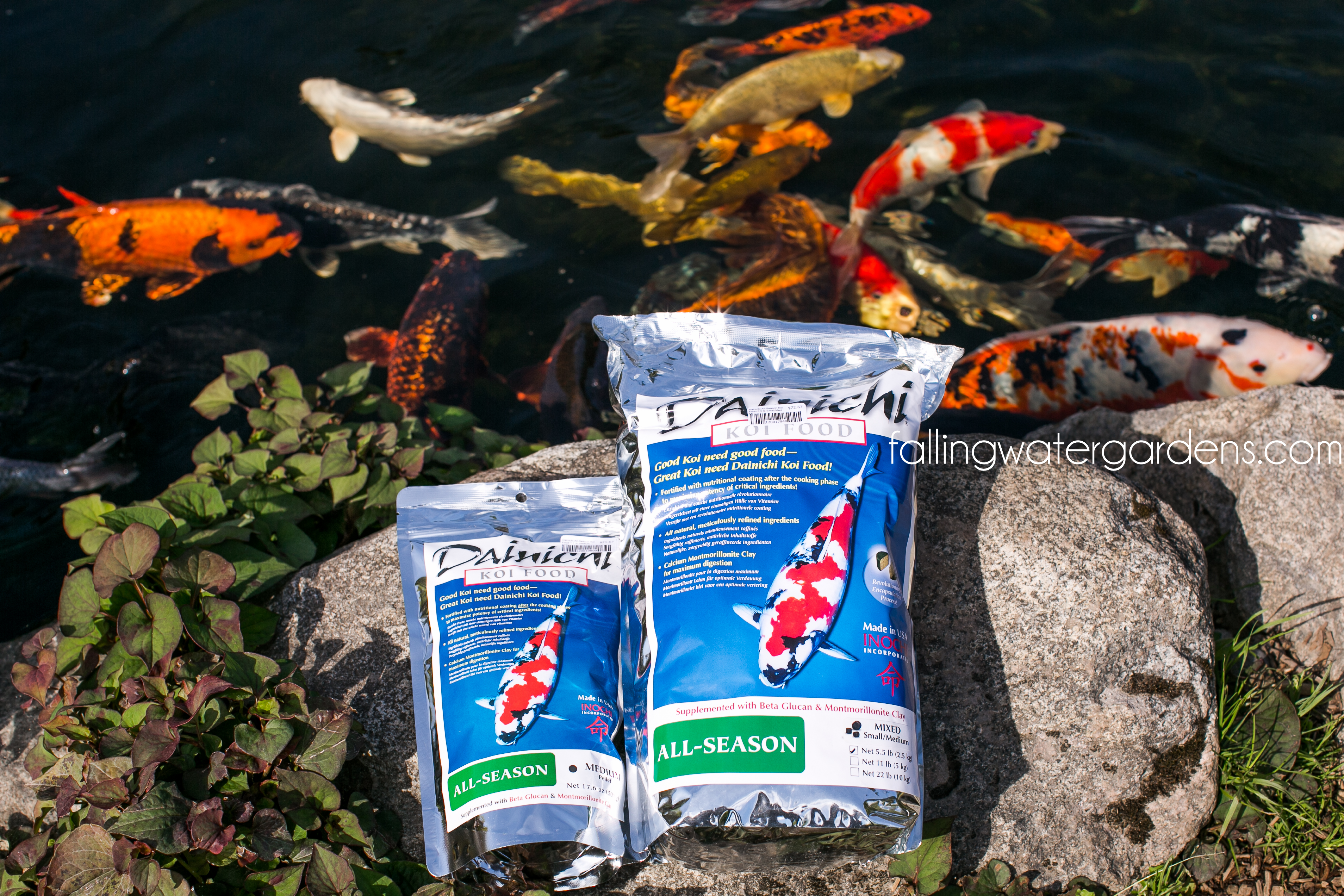 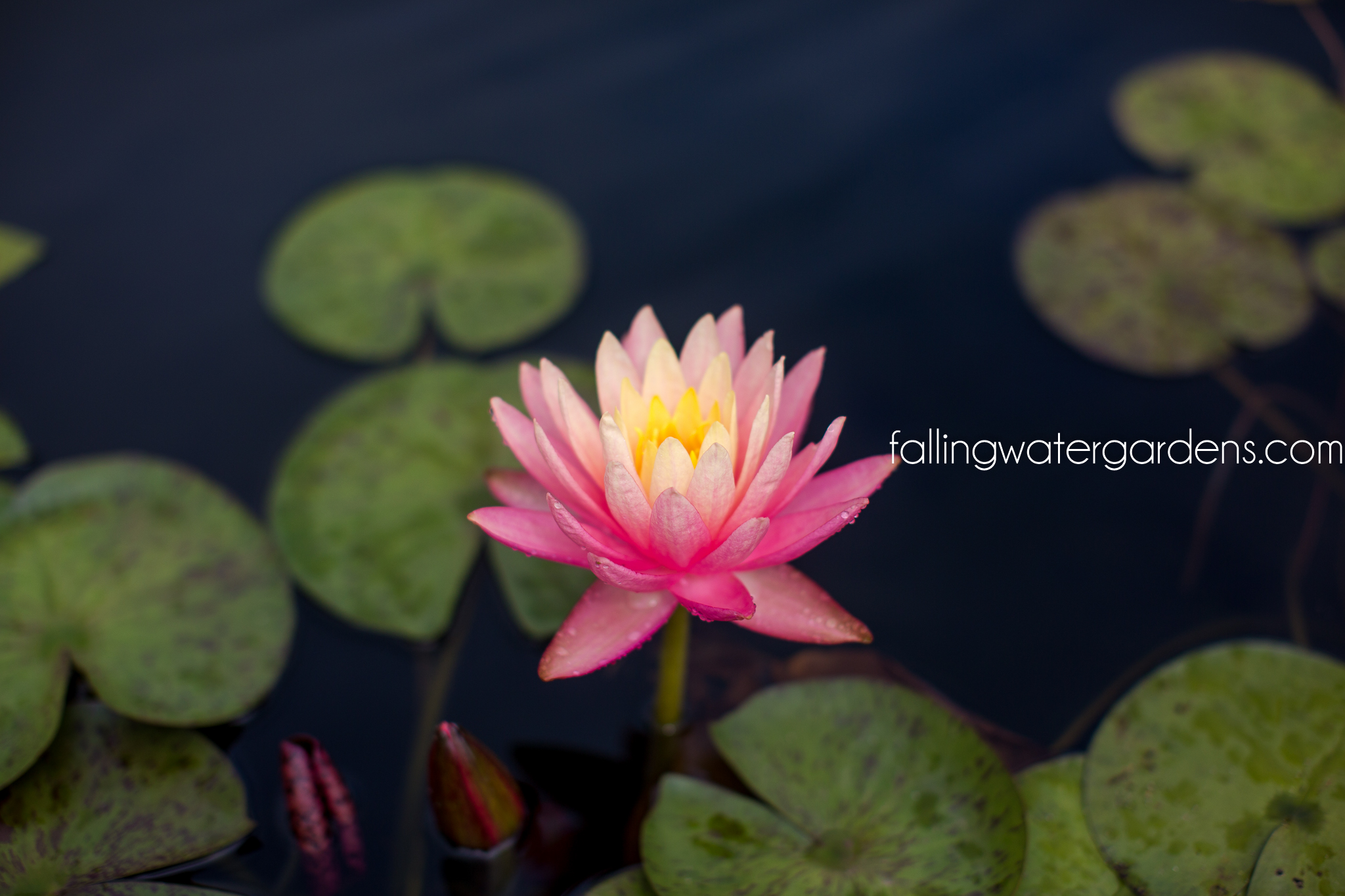 Hardy Water Lilies Being in Washington State, we are fortunate enough to experience all four seasons. As we transition into fall and winter, pond gardens begin to fade. We receive 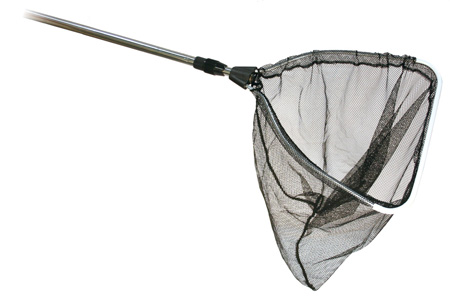 POND MUST-HAVE ITEMS Below is our list of must-haves to get your pond ready and in tip-top shape for the year. Bacteria Beneficial pond bacteria are responsible for maintaining crystal

Closed Tuesday-Thursday except by appointment