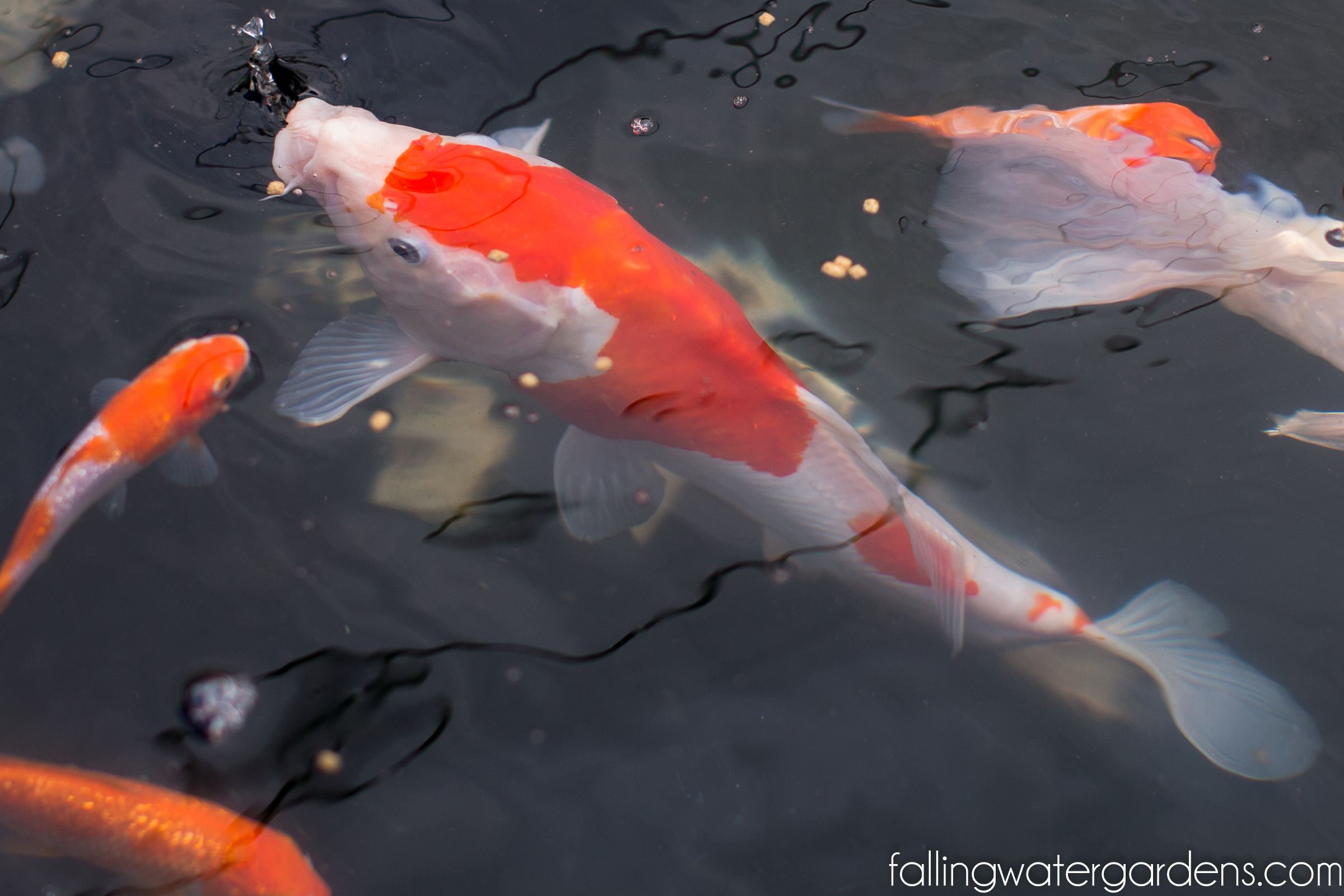 As a pond installation company, we have installed, rebuilt, and repaired many koi ponds. We are experts in our field and we love what we do. We especially love introducing our client’s to the koi world!

As you may be in the first stages of building your dream pond, or are doing research about koi, we thought it would be a great idea to share the different koi breeds and what to look for as you search for “the one”.

Introducing one of the most popular breeds of koi, Kohaku.

What must you consider when picking out a Kohaku?

Kohaku are known for their lustrous white skin and vibrant red markings. The red markings across the body are called Hi and the radiant white is called Shiroji. The more Shiroji and balanced Hi on a Kohaku, the better!

Another aspect to note is the koi’s body type. You want the koi to have a thick caudal peduncle and a broad upper body.

Visit Falling Water Gardens to see Kohaku and other varieties of koi. They are so easy to love!

Sanke tend to change their markings as they mature, which is why some koi owners confuse their Sanke to be a Kohaku.

How can I tell if my koi is a Sanke?

The first Showa was born in 1927, after breeding a Ki Utsuri and a Kohaku. This breed was later improved in 1965 by breeding a female Showa with a male Sanke and a male Kohaku.

Showa are sometimes confused with a Hi Utsuri.

Showa are black fish with red and white markings. There must be red and black markings on the head. Showa are known for their vibrant Hi (red) and the proportionate Sumi (black) and Shiroji (white). The markings on these beautiful fish resemble thoughtful brush strokes.

Breeding your Showa with a Kohaku or Sanke will help improve the markings and color.

Lauren says that Showa are a MUST-HAVE.

Tanchos are non-metallic, white koi. The Hi (red) marking on the head is what distinguishes this gorgeous fish. The Hi needs to be round and cover the majority of the space between the eyes and nose. The marking should be sharp and a deep red. The other white areas must be free of imperfections and markings.

The Kikokuryu is a metallic black & white Doitsu (scaleless or partially scaled) koi fish. Kikokuryu can be black & white, blue & white, or silver & white. Any blue on this fish is not permanent. The fish changes quite frequently. Changes may be caused by environmental changes such as water temperature, lighting, water chemistry, etc.

Kikoruyu has good sheen throughout it’s body. The whiter the white on the head, the better quality the Kikoruyu is.

The name Utsuri is short for Utsurimono. An Utsuri is a black koi with red, yellow, or white markings. The Utsuri koi will have evenly balanced markings.

Shiro (white) Utsuri are two-colored koi and are the most commonly seen. The white should be pure with a subtle sheen and the sumi (black markings) should be jet black and glossy. Dorsal and caudal fins have partial sumi.

The Hi Utsurui is red to orange & black, and the Ki Utsuri is yellow & black.

The sumi should begin at the mouth or nosed and spaced in a pattern-like manner all the way to the base of the tail.

Bekko koi are non-metallic. They are solid white, red, or yellow with black markings. The head of Bekko koi should always be free of any sumi (black) markings. This breed of koi is one of the easiest breeds to identify, which is why it’s a popular breed for beginning koi enthusiasts.

Kawarimono is a broad classification used for a wide variety of non metallic Koi that don’t fit into other classes. Some examples are breeds of their own, while others display “one-of-a-kind” color and patterning. Furthermore, certain Koi are placed in Kawarimono because they deviate so much from the judging criteria applied to what would typically be their own variety.

Asagi (ah-SAH-gee) are fully scaled, nonmetallic koi. The name is derived from the Japanese word for pale blue or indigo, and they are sometimes referred to as Blue Back koi.

The blue scales with lighter blue (or even white) edging that run down the body create the diamond-shaped, pine cone reticulation pattern that characterizes this type of koi.

Asagi were one of the first koi variants to be produced, and were documented around 1850.

Falling Water Gardens is the go-to spot when shopping for Koi or goldfish in Washington State.

We’d love to hear from you!

Email us a picture and introduce us to your favorite Koi!

Closed Tuesday-Thursday except by appointment